The picture below is a moment in time capturing what has got to be one of the more crushing moments from my youth. It’s the day my family left Greece on our way to my father’s new assignment in Ramstein, Germany.

If you look behind us, you can see that we’re packed and ready to go, with a large bundle strapped to the top of the car. The smiles on our faces, (in response to the request of our randomly recruited photographer), betray the true nature of the turmoil inside me. Moments later, we would pull away from the curb and my life would change forever. My home, school, friends and a place that I had grown such a close connection to… ripped away once again. Of course it wouldn’t be the first time, nor the last.

As we drove away to catch the ferry to Italy, with the city of Athens fading into the distance behind us, I could no longer contain my emotions. My oldest sister would try to comfort me in the back seat of our car, but I was painfully aware, even at that young age, that a significant chapter of my life was ending. I remember it like it was yesterday. I believe that military brats and 3C kids have a more heightened awareness, or clear delineation of those moments in life than the general public, for no other reason than that they happen so often.

I loved Greece. The sights, sounds, culture, ancient history, food, weather, people… special childhood friends. To a kid it was like living in paradise, and everything about it lives in my memory. All military brats and 3C kids have those special places they’ve lived in that leave an indelible imprint on them over the years. This was mine.

Of course nothing lasts forever, and I would move on and adapt to yet another new country and environment. As there had been before, there would be other special places, times and people and this scenario would continue to play out. Looking back, I never really think of my life as a unified whole, but as a series of unrelated, disparate pieces. Different houses, different schools, new friends, that’s just the way it was… over and over again. The faces and locations might change, the emotional impact on those going through it does not.

I would return to Greece years later in my mid-20s, living and working on the island of Ios and in downtown Athens… trying in part to recapture what I had lost all those years ago. And although I was able to create a new set of memories, new friends and special moments from another chapter in my life, it wasn’t the same. How could it be? What was gone was gone… and so it is.

Over the years I’ve found that, unlike my civilian friends here in the states, I don’t talk about my past in terms of age or what year it was, I always seem to talk about it in reference to where I was living at the time. That’s simply the way I categorize and remember things. And this has had the unfortunate tendency to get me in trouble, leaving some with the impression that I’m some kind of blowhard or braggart. (“He’s talking about living in Europe again… give it a rest already!”) In truth, I’m just reciting tales of my reality just like everyone else, my stories just took place overseas. Unfortunately, like some other brats, this has led to me becoming more guarded as I’ve gotten older, and speaking about my past with very selective audiences or in more generic terms, so that people don’t misinterpret it as bluster.

As time has passed I’ve also searched on occasion for some of those friends I’ve lost over the years, and once in a while I’ve been successful in finding them, (the recent onset of social media has certainly helped). But the reality of reuniting never quite equals the Hollywood fantasy that tends to take hold in your mind. Time passes… people change, move on and handle the realities and complexities of their lives in different ways. Some try to maintain those distant connections through the years, and others find it easier to purge and shut out the past in order to move on, (but I’ll save my stories of the intricacies of brat friendship for another day).

For many of us it’s been difficult coming to terms with all of the changes we’ve been through, but when I think of it now it really doesn’t matter… regardless of what’s taken place in the space between now and then, in my mind I’ll always look back with appreciation and a little smile when remembering myself as that little blonde kid playing on the streets of that Mediterranean paradise. 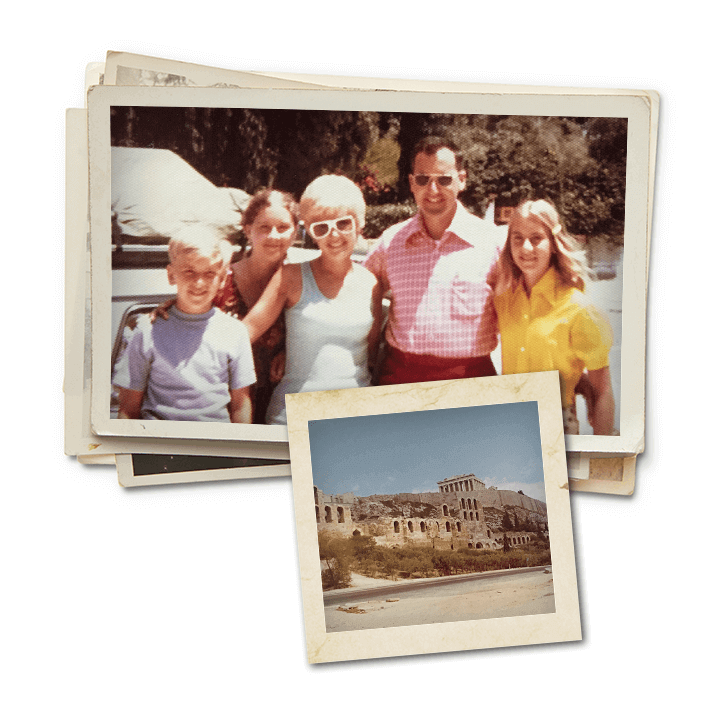