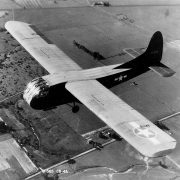 In 1960 my father was an Air Force master sergeant stationed at Tachikawa Air Base, Japan. His job was editor of the base newspaper and sometimes he would take me with him when he went out for a story or to take photos. I was 9 years old and on this day a big general was arriving on base and I went with him to the base terminal to watch his plane land and see my dad get his story. When we arrived he took me outside by the fence to stand and wait for him. The plane landed and the general came out and talked on a speaker to the people greeting him. After a while they walked away and got into cars and left.

My father was standing near the plane writing into his notepad when one of the plane’s pilots got out and walked by him. After a few steps the captain stopped and backed up talking to my father. They talked for about 10-15 minutes, then they shook hands and the pilot took a step back and gave a hard salute to my father who returned his salute and then the captain walked away.

My father walked over and got me and we got into our car. I ask my father, “Daddy, that man was an officer and you’re not an officer, why did he salute you?” My dad smiled and said, “See the wings I have on my uniform?” I said “yes,” and then he said, “well, my wings have a ‘G’ in the middle and that means I was a ‘Glider Pilot’ during World War II and he knew that was ‘special’ and he wanted to thank me for my service.” That was the first time my dad ever told me he had been a glider pilot during the war.